A strategy to improve local goat performance is by crossbreeding, which main benefit comes from the effect of heterosis. The occurrence of heterosis is determined by the combination of parental alleles. Crossbreeding would change allele frequency by improving heterozygosity and lowering homozygosity. This study was aimed to predict the heterozygosity value related to BW trait by using simulation of allele frequency changes in different crossbreeding scenario of Indonesian goat breed. Five crossbreeding scenarios were studied: Indonesian goat breed called Jawarandu (Etawah grade ♂ >< Kacang ♀), Boer (Boer ♂ >< Boer ♀), Boerja F1 (Boer ♂ >< Jawarandu ♀), Boerja F2 (Boer ♂ >< Boerja F1♀) and Boerja F3 (Boer ♂ >< Boerja F2 ♀). Allele frequency simulation was conducted, the heterozygosity in different crossbreeding scenarios were estimated and the associated to the observed BW measured in crossbreed goat samples.  BW (kg) data was retrieved from 1.5-year-old goats from the studied samples. In this study, allele that control BW trait was coded as “B” for high and “b” for low BW. The initial allele frequencies in Jawarandu were set up as (B=0.45; b=0.55) and in Boer were (B=0.7; b=0.3). The simulation resulted in the allele frequency in Boerja F1 were (B=0.57; b=0.43), Boerja F2 (B=0.64; b=0.36) and Boerja F3 (B=0.67; b=0.33). The estimated heterozygosity values were 0,42; 0,54; 0,52; 0,47 and 0,44 in Jawarandu, Boer, F1, F2 and F3 respectively. Whereas the respective the average of BW was 33,20±8,70; 49,50±5,90; 41,80±4,10; 41,60±3,60; and 39,80±3,20 respectively. We confirmed that crossbreeding increases heterozygosity in our simulation study. Our attempt to associate this allele frequency changes with BW trait in Indonesian crossbred goats yields in positive association results. 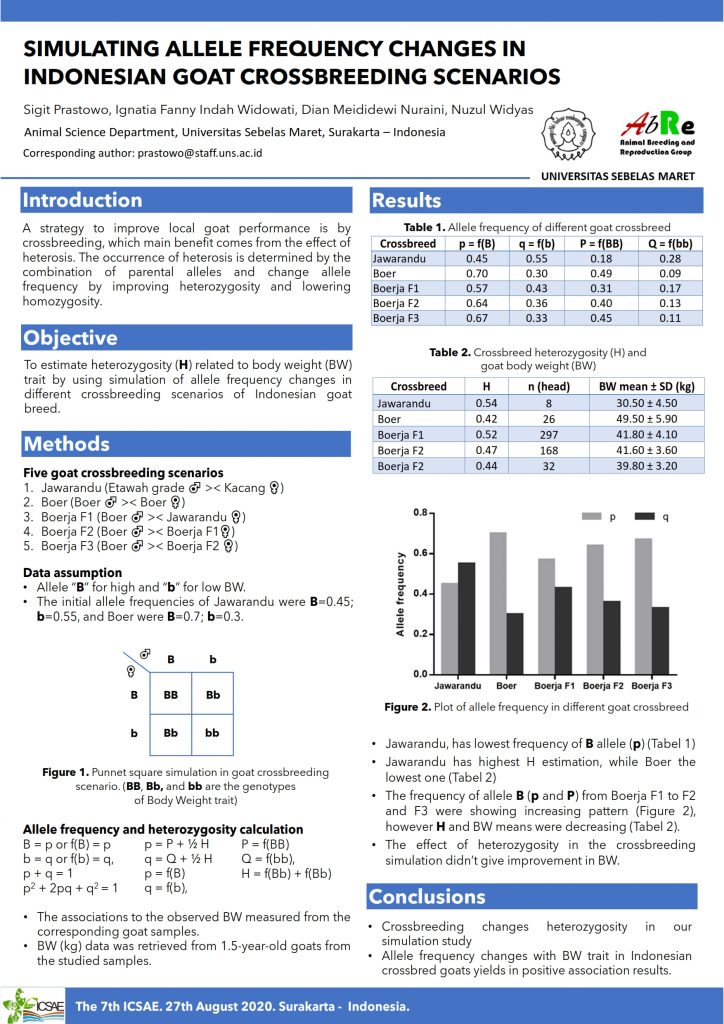