Indonesia as an archipelago has the longest coastline in the world, after Canada, which is 95,181 km, The potential of marine and coastal resources is very large and has the potential to be explored further to support the welfare of people living on land.  One of the economically valuable marine resource commodities is seaweed. The potential for seaweed in agriculture has not been utilized optimally. Seaweed can be used as raw material for making organic fertilizers, soil enhancers and biostimulants. In some countries seaweed-based fertilizers and seaweed extract have been widely used. The compounds contained in seaweed extract are polysaccharides (ie galactan, fucoidan, alginate, and laminarin), proteins (lectins), unsaturated fatty acids, pigments, polyphenols, macro nutrients (K, Mg, Ca, and Na), and fitohormon (Chojnacka et al, 2012). The existence of growth-stimulating activity from the seaweed-based formulation, can be used as a biostimulant to increase food crop productivity (Sivasankari et al, 2008; Khan et al, 2009; Rathore et al, 2009). The purpose of this research was to obtain a biodecomposer isolates and formulas for making seaweed compost. The results of the research, conducted at ISRI, show that the F3 formula contained three isolates (GK5.7 ; SW2.1 ; NP2.4) is the best formula for the decomposition of Sargassum seaweed, based on CO2 evolution parameters, decreasing of raw material weight, and C/N. 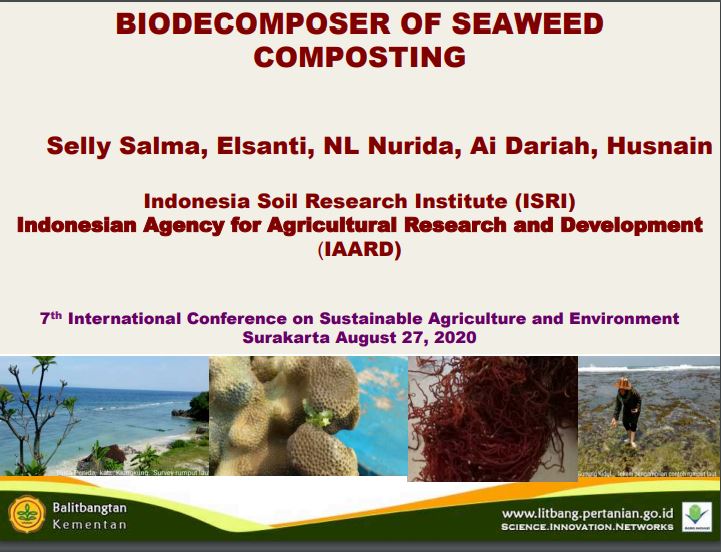